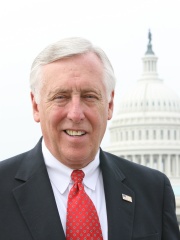 Steny Hamilton Hoyer (; born June 14, 1939) is an American politician and attorney serving as U.S. Representative for Maryland's 5th congressional district since 1981 and as House Majority Leader since 2019. A Democrat, he was first elected in a special election on May 19, 1981, and is currently serving in his 20th term. The district includes a large swath of rural and suburban territory southeast of Washington, D.C. Read more on Wikipedia

Since 2007, the English Wikipedia page of Steny Hoyer has received more than 1,363,260 page views. His biography is available in 18 different languages on Wikipedia making him the 13,043rd most popular politician.