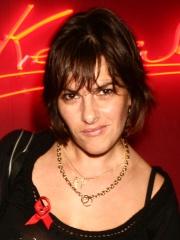 Tracey Karima Emin, CBE, RA (; born 3 July 1963) is a British artist known for her autobiographical and confessional artwork. Emin produces work in a variety of media including drawing, painting, sculpture, film, photography, neon text and sewn appliqué. Once the "enfant terrible" of the Young British Artists in the 1980s, Tracey Emin is now a Royal Academician.In 1997, her work Everyone I Have Ever Slept With 1963–1995, a tent appliquéd with the names of everyone the artist had ever shared a bed with, was shown at Charles Saatchi's Sensation exhibition held at the Royal Academy in London. Read more on Wikipedia