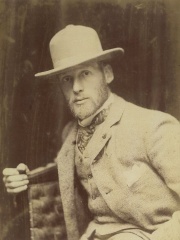 Thomas William Roberts (8 March 1856 – 14 September 1931) was an English-born Australian artist and a key member of the Heidelberg School art movement, also known as Australian impressionism. After studying in Melbourne, he travelled to Europe in 1881 to further his training, and returned home in 1885, "primed with whatever was the latest in art". A leading proponent of painting en plein air, he joined Frederick McCubbin in founding the Box Hill artists' camp, the first of several plein air camps frequented by members of the Heidelberg School. Read more on Wikipedia

Among people born in 1856, Tom Roberts ranks 117. Before him are Karolina Widerström, Paul Henri Lecomte, Keir Hardie, William Wallace Denslow, Frank Harris, and Kenyon Cox. After him are Jens Bratlie and John Redmond. Among people deceased in 1931, Tom Roberts ranks 135. Before him are Daniel Chester French, Charles Clary, John Monash, Frank Harris, Alma Rubens, and George Whitefield Chadwick. After him are Robert Edeson and Vachel Lindsay.