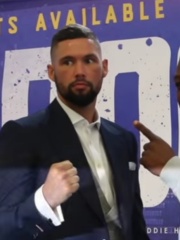 Anthony Lewis Bellew (born 30 November 1982) is an English former professional boxer who competed from 2007 to 2018, and has since worked as a boxing analyst and commentator. He held the WBC cruiserweight title from 2016 to 2017, and challenged for the undisputed cruiserweight championship in his final fight. At regional level, he held the British and Commonwealth light-heavyweight titles between 2010 and 2014, the European cruiserweight title from 2015 to 2016, and is a three-time ABA heavyweight champion as an amateur. Read more on Wikipedia

Among boxers, Tony Bellew ranks 245 out of 326. Before him are Odlanier Solís, Samuel Peter, Román González, Andre Ward, Tony Yoka, and Maurizio Stecca. After him are Rakhim Chakhkiev, Siarhei Liakhovich, Oktay Urkal, Torsten May, Bakhyt Sarsekbayev, and Zhang Xiaoping.

Among BOXERS In United Kingdom