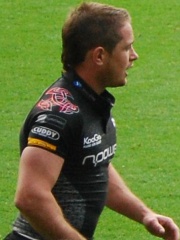 Shane Mark Williams, (born 26 February 1977) is a Welsh rugby union player most famous for his long and successful tenure as a wing for the Ospreys and the Wales national team. He also played scrum-half on occasion. Williams is the record try scorer for Wales, and is fourth on the international list of leading rugby union test try scorers behind Daisuke Ohata, Bryan Habana and David Campese. Read more on Wikipedia

Since 2007, the English Wikipedia page of Shane Williams has received more than 433,476 page views. His biography is available in 18 different languages on Wikipedia making him the 9th most popular rugby player.