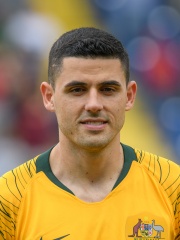 Since 2007, the English Wikipedia page of Tom Rogic has received more than 923,881 page views. His biography is available in 29 different languages on Wikipedia (up from 28 in 2019). Tom Rogic is the 14,665th most popular soccer player (down from 11,658th in 2019), the 722nd most popular biography from Australia and the 99th most popular Australian Soccer Player.

BBC News
Long-serving duo Nir Bitton & Tom Rogic to leave Celtic
Nir Bitton and Tom Rogic will leave Celtic at the end of the season, the club have announced.
BBC News
'I couldn't contain my emotions' - Celtic's Tom Rogic
Tom Rogic gives his final thoughts as a Celtic player after being with the Scottish champions for nine years
Daily Mail
Tom Rogic confirms he will LEAVE Celtic this summer after 10-year stint
The midfielder recently worried fans by uploading a series of photos of himself during his time with Celtic, in a cryptic message that suggested he would be leaving the club.
Ollie Lewis