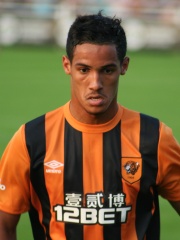 Thomas Christopher Ince (born 30 January 1992) is an English professional footballer who plays as either an attacking midfielder, winger or forward for Championship club Stoke City. The son of former England midfielder Paul Ince, Tom Ince began his career with Liverpool, for whom he made his professional debut in the 2010–11 season, coming on as a substitute in the League Cup. He later spent time that season on loan at League One club Notts County, scoring twice in eight appearances. Read more on Wikipedia

Since 2007, the English Wikipedia page of Tom Ince has received more than 1,053,246 page views. His biography is available in 23 different languages on Wikipedia making him the 11,031st most popular soccer player.