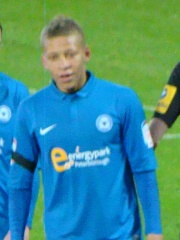 Dwight Devon Boyd Gayle (born 17 October 1989) is an English professional footballer who plays as a striker for Premier League club Newcastle United. Gayle played in the Arsenal academy as a youth, but was released in 2007, after which he began his career with Ryan of the Essex Olympian Football League. In subsequent seasons, he would work his way back up through the English football pyramid via stints at Stansted, Bishop's Stortford, Dagenham & Redbridge and Peterborough United, before establishing himself in the Premier League with Crystal Palace. Read more on Wikipedia