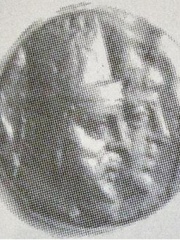 Tigranes IV ( 30s BC–1) was a Prince of the Kingdom of Armenia and member of the Artaxiad Dynasty who served as a Roman Client King of Armenia from 8 BC until 5 BC and 2 BC until 1 AD. Read more on Wikipedia

Among politicians, Tigranes IV ranks 7,207 out of 15,710. Before him are Amanishakheto, Otto Orseolo, Ivan Susanin, Neidhart von Reuental, Jacques-François Menou, and Osorkon III. After him are Hugh II, Duke of Burgundy, Eberhard III, Duke of Württemberg, Sisenand, William VII, Duke of Aquitaine, Al-Mansur Billah, and Anthemius.

Others Born in 35 BC