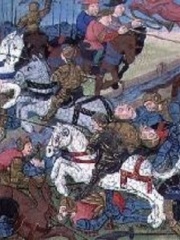 Theuderic II (also spelled Theuderich, Theoderic or Theodoric; in French, Thierry) (587–613), king of Burgundy (595–613) and Austrasia (612–613), was the second son of Childebert II. At his father's death in 595, he received Guntram's kingdom of Burgundy, with its capital at Orléans, while his elder brother, Theudebert II, received their father's kingdom of Austrasia, with its capital at Metz. He also received the lordship of the cities (civitates) of Toulouse, Agen, Nantes, Angers, Saintes, Angoulême, Périgueux, Blois, Chartres, and Le Mans. During his minority, and later, he reigned under the guidance of his grandmother Brunhilda, evicted from Austrasia by his brother Theudebert II. In 596, Clotaire II, king of Neustria, and Fredegund, Clotaire's mother, took Paris, which was supposed to be held in common. Read more on Wikipedia

Theuderic II was most famous for being the first Merovingian king to be buried in the royal necropolis of Saint Denis.