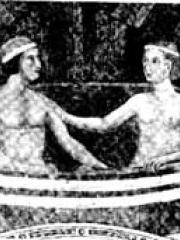 Theodora (circa 870 – 916) was a senatrix and serenissima vestaratrix of Rome. She was the mother of Marozia, alleged concubine to Pope Sergius III, and the mother of Pope John XI, fathered by—according to Liutprand of Cremona and the Liber Pontificalis— Sergius. A third contemporary source, however—the annalist Flodoard (c. Read more on Wikipedia

Since 2007, the English Wikipedia page of Theodora has received more than 156,764 page views. Her biography is available in 17 different languages on Wikipedia making her the 5,473rd most popular politician.

Page views of Theodoras by language