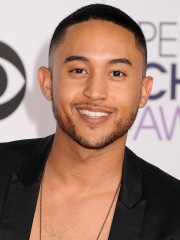 Tahj Dayton Mowry (; born May 17, 1986) is an American actor and singer. He is the younger brother of identical twins Tia Mowry and Tamera Mowry and is known for his role on the show Smart Guy as the main character TJ on The WB, though the show gained later recognition on Disney Channel. Mowry was later cast as the voice of ten-year-old super genius Wade Load on Kim Possible as a nod to this role. Read more on Wikipedia

Since 2007, the English Wikipedia page of Tahj Mowry has received more than 3,131,351 page views. Her biography is available in 15 different languages on Wikipedia making her the 8,572nd most popular actor.