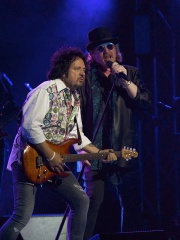 Steven Lee Lukather (born October 21, 1957) is an American guitarist, singer, songwriter, arranger and record producer, best known as the sole continuous founding member of the rock band Toto from its founding in 1976 to its latest hiatus in 2019. A prolific session musician, Lukather has recorded guitar tracks for more than 1,500 albums representing a broad array of artists and genres. He has also contributed to albums and hit singles as a songwriter, arranger and producer. Read more on Wikipedia

Since 2007, the English Wikipedia page of Steve Lukather has received more than 1,610,422 page views. His biography is available in 25 different languages on Wikipedia making him the 580th most popular musician.