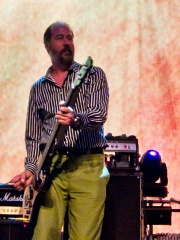 Krist Anthony Novoselic (; Croatian: Novoselić; born May 16, 1965) is an American musician and activist, best known as the bassist and a founding member of the rock band Nirvana.After Nirvana disbanded following the death of its frontman Kurt Cobain in 1994, Novoselic formed Sweet 75 in 1995 and Eyes Adrift in 2002, releasing one album with each band. From 2006 to 2009, he played in the punk rock band Flipper, and in 2011, he contributed bass and accordion to the song "I Should Have Known" on the Foo Fighters' studio album Wasting Light. Since June 2017 he has played bass and accordion for the band Giants in the Trees.Outside of music Novoselic has been active politically, being involved in the formation of a PAC named JAMPAC (Joint Artists and Musicians Political Action Committee). Read more on Wikipedia