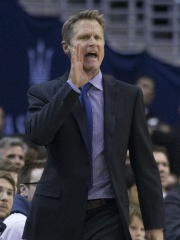 Stephen Douglas Kerr (born September 27, 1965) is an American professional basketball coach and former player who is the head coach of the Golden State Warriors of the National Basketball Association (NBA). He is an eight-time NBA champion, having won five titles as a player (three with the Chicago Bulls and two with the San Antonio Spurs) as well as three with the Warriors as a head coach. Kerr has the highest career three-point percentage (45.4%) in NBA history for any player with at least 250 three-pointers made. Read more on Wikipedia

Since 2007, the English Wikipedia page of Steve Kerr has received more than 9,383,473 page views. His biography is available in 28 different languages on Wikipedia making him the 91st most popular basketball player.