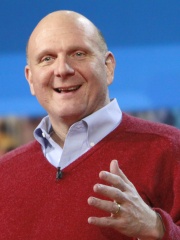 Steven Anthony Ballmer (; born March 24, 1956) is an American businessman and investor who served as the chief executive officer of Microsoft for fourteen years from 2000 to 2014. Ballmer is the current owner of the Los Angeles Clippers of the National Basketball Association (NBA). As of July 2020, Forbes estimates his personal wealth at US$71.4 billion, ranking him the 11th richest person in the world.Ballmer was hired by Bill Gates at Microsoft in 1980 and subsequently left the MBA program at Stanford University. Read more on Wikipedia

Since 2007, the English Wikipedia page of Steve Ballmer has received more than 4,169,032 page views. His biography is available in 48 different languages on Wikipedia making him the 44th most popular businessperson.