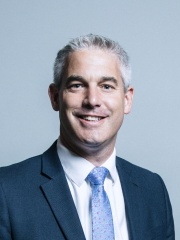 Stephen Paul Barclay (born 3 May 1972) is a British politician who has been Chief Secretary to the Treasury since February 2020 and previously served as Secretary of State for Exiting the European Union from November 2018 until January 2020. A member of the Conservative Party, he has been the Member of Parliament (MP) for North East Cambridgeshire since 2010.Barclay served as Lord Commissioner of the Treasury from 2016 to 2017 and Economic Secretary to the Treasury from 2017 until 2018. After the January 2018 cabinet reshuffle, he became Minister of State at the Department of Health and Social Care; Barclay was appointed Brexit Secretary in November that year following the resignation of Dominic Raab. Read more on Wikipedia