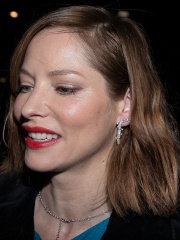 Sienna Tiggy Guillory (; born 16 March 1975) is an English actress and former model. She is perhaps best known for her portrayal of Jill Valentine in several entries of the Resident Evil action-horror film series. Other prominent roles include elf princess Arya Dröttningu in the fantasy-adventure film Eragon, and the title role in the TV miniseries Helen of Troy. Read more on Wikipedia

Since 2007, the English Wikipedia page of Sienna Guillory has received more than 2,288,856 page views. Her biography is available in 36 different languages on Wikipedia making her the 2,854th most popular actor.

Among actors, Sienna Guillory ranks 2,830 out of 8,832. Before her are Stella Stevens, Clive Revill, Michael Peña, Patsy Kensit, Kim Coates, and Dev Anand. After her are Paz Vega, Cameron Boyce, Lucho Gatica, Dominique Blanc, Michael B. Jordan, and Barry Corbin.