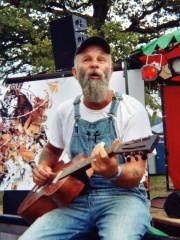 Steven Gene Wold (né Leach, March 19, 1951), commonly known as Seasick Steve, is an American blues musician. He plays mostly personalized guitars and sings, usually about his early life doing casual work. From the late 1960s, he worked as a musician and recording engineer in the US and Europe, as well as pursuing other work, before his commercial breakthrough, initially in the UK, at the end of 2006. Read more on Wikipedia

Since 2007, the English Wikipedia page of Seasick Steve has received more than 871,021 page views. His biography is available in 18 different languages on Wikipedia making him the 964th most popular musician.

Among musicians, Seasick Steve ranks 967 out of 2,258. Before him are Kenny Burrell, Berry Gordy, Blackie Lawless, Shavo Odadjian, David Sanborn, and Prince Buster. After him are Carmine Appice, Tyler, the Creator, Gary Peacock, Vinnie Colaiuta, Pixinguinha, and Clark Terry.