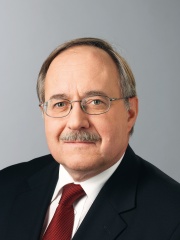 Samuel Schmid (born 8 January 1947) is a Swiss politician who was a member of the Swiss Federal Council from 2000 to 2008. He was the head of the Federal Department of Defence, Civil Protection and Sports (notably acting as a defense minister for Switzerland). Schmid was born in Rüti bei Büren, Canton of Bern. Read more on Wikipedia

Since 2007, the English Wikipedia page of Samuel Schmid has received more than 28,804 page views. His biography is available in 24 different languages on Wikipedia making him the 9,969th most popular politician.

Among politicians, Samuel Schmid ranks 9,919 out of 14,801. Before him are Marcus Aemilius Lepidus, Louis Charles Delescluze, John II of Jerusalem, Gabriel Antonio Pereira, Rafael Núñez, and Vitale I Michiel. After him are Élias Sarkis, Dirk VII, Count of Holland, Alexander Miasnikian, Vera Aceva, Nicaea of Macedon, and Hamad bin Thuwaini of Zanzibar.