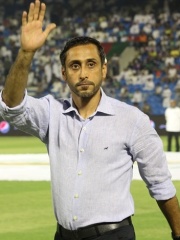 Sami Abdullah Al-Jaber (Arabic: سامي الجابر‎; born 11 December 1972) is a retired football striker from Saudi Arabia. He spent the majority of his career from 1988 to 2008 with Al-Hilal. He is his country's second highest international goalscorer with 46 goals in 156 internationals from 1992 to 2006. Read more on Wikipedia

Since 2007, the English Wikipedia page of Sami Al-Jaber has received more than 172,859 page views. His biography is available in 32 different languages on Wikipedia making him the 3,116th most popular soccer player.