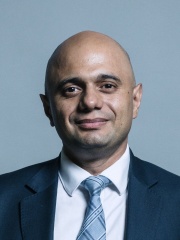 Sajid Javid (; born 5 December 1969) is a British politician who has served as the Member of Parliament (MP) for Bromsgrove since 2010. A member of the Conservative Party, he was Home Secretary from 2018 to 2019 and Chancellor of the Exchequer from 2019 to 2020. Javid was the first British Asian to hold one of the Great Offices of State in the UK. Born in Rochdale, Lancashire to a British Pakistani family, Javid was raised largely in Bristol. Read more on Wikipedia

Since 2007, the English Wikipedia page of Sajid Javid has received more than 3,075,324 page views. His biography is available in 26 different languages on Wikipedia making him the 276th most popular economist.