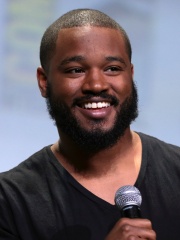 Ryan Kyle Coogler (born May 23, 1986) is an American film director, producer, and screenwriter. His first feature film, Fruitvale Station (2013), won the top audience and grand jury awards in the U.S. dramatic competition at the 2013 Sundance Film Festival. He has since co-written and directed the seventh film in the Rocky series, Creed (2015), and the Marvel film Black Panther (2018), the latter of which broke numerous box office records and became the highest-grossing film of all time by a black director.Coogler's films have received significant critical acclaim and commercial success. Read more on Wikipedia

Since 2007, the English Wikipedia page of Ryan Coogler has received more than 4,403,496 page views. His biography is available in 27 different languages on Wikipedia making him the 1,263rd most popular film director.