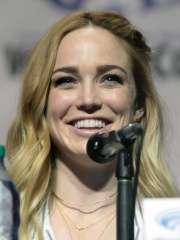 Caitlin Marie Lotz (born December 30, 1986) is an American actress, dancer and singer. She has portrayed Stephanie Horton in Mad Men, Officer Kirsten Landry in the MTV mockumentary series Death Valley (2011), Annie in The Pact (2013), and Sara Lance/The Canary/White Canary in The CW's Arrowverse television series, where she has appeared in Arrow, Legends of Tomorrow, The Flash, Supergirl, and Batwoman. Read more on Wikipedia

Among actors, Caity Lotz ranks 6,203 out of 10,030. Before her are Victoria Song, Gracie Allen, Demet Özdemir, Suraiya, P. J. Soles, and Jodhi May. After her are Keith Andes, Konstantin Lavronenko, Brendan Fehr, Buck Angel, Lucas Grabeel, and Nick Stahl.