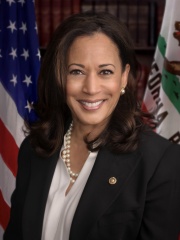 HuffPost
Kamala Harris Gets A Big Laugh Out Of Another Trump Run: ‘Please’
Harris is not worried about a possible Trump run in 2024 as she speaks up for small businesses at a D.C. holiday market.
Mary Papenfuss
Yahoo Entertainment
Kamala Harris calls nurse on Thanksgiving to thank her for her work fighting on the COVID-19 frontline
Harris spoke to Talisa Hardin, a registered nurse at the University of Chicago Medical Center, and posted a video of the call.
Naina Bhardwaj
IndieWire
‘All Rise’: Kamala Harris’ Debate Performance Influenced Simone Missick in Season 2
In the second episode of the CBS legal drama, the actress delved into the "angry Black woman" stereotype with a powerful monologue.
Tambay Obenson
The Indian Express
Joe Biden, Kamala Harris send greetings on Guru Nanak’s 551st birth anniversary
They sent extended their warmest greetings to Sikhs in the US and around the world as they observe the 551st birth anniversary of Guru Nanak Dev.
PTI

Among politicians, Kamala Harris ranks 8,447 out of 15,710. Before her are Michael of Trebizond, Roger of Salerno, Henry Morgenthau Jr., Armand Călinescu, William VI, Duke of Aquitaine, and Nebojša Radmanović. After her are Marcus Valerius Corvus, Thrasybulus of Syracuse, Joseph Caillaux, Ulpia Severina, Eochaid, son of Rhun, and Kamehameha V.