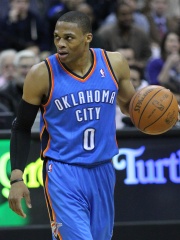 Russell Westbrook III (born November 12, 1988) is an American professional basketball player for the Houston Rockets of the National Basketball Association (NBA). He is a nine-time NBA All-Star and earned the NBA Most Valuable Player Award for the 2016–17 season. He is also an eight-time All-NBA Team member, led the league in scoring in 2014–15 and 2016–17, and won back-to-back NBA All-Star Game Most Valuable Player awards in 2015 and 2016. Read more on Wikipedia

Since 2007, the English Wikipedia page of Russell Westbrook has received more than 10,252,183 page views. His biography is available in 48 different languages on Wikipedia making him the 134th most popular basketball player.