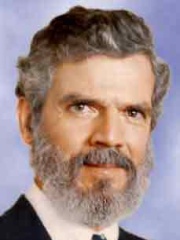 Rudolph Joseph Rummel (October 21, 1932 – March 2, 2014) was an American political scientist and professor at the Indiana University, Yale University, and University of Hawaiʻi. He spent his career studying data on collective violence and war with a view toward helping their resolution or elimination. Contrasting genocide, Rummel coined the term democide for murder by government, such as the genocide of indigenous peoples and colonialism, Nazi Germany, the Stalinist purges, Mao Zedong's Cultural Revolution, and other authoritarian, totalitarian, or undemocratic regimes, coming to the conclusion that democratic regimes result in the least democides.Rummel estimated that a total of 212 million people were killed by all governments during the 20th century, of which 148 million were killed by Communist governments from 1917 to 1987. Read more on Wikipedia