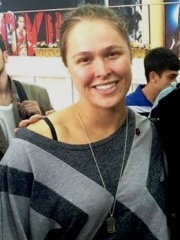 Ronda Jean Rousey (; born February 1, 1987) is an American former professional wrestler, actress, author, and former professional mixed martial artist and judoka who has been signed to WWE as a wrestler since 2018. Her longstanding nickname, "Rowdy", was inherited from late professional wrestler Roddy Piper.After becoming the first American woman to earn an Olympic medal in judo by winning bronze at the 2008 Summer Olympics, Rousey began pursuing a career in mixed martial arts (MMA). She won her MMA debut for King of the Cage before going to Strikeforce, where she became the last-ever Strikeforce Women's Bantamweight Champion before the Ultimate Fighting Championship (UFC) bought Strikeforce in 2011. Read more on Wikipedia

Since 2007, the English Wikipedia page of Ronda Rousey has received more than 25,126,017 page views. Her biography is available in 40 different languages on Wikipedia making her the 28th most popular martial arts.

Among MARTIAL ARTS In United States