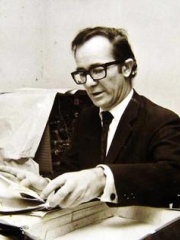 Rodolfo Jorge Walsh (January 9, 1927 – March 25, 1977) was an Argentine writer and journalist of Irish descent, considered the founder of investigative journalism. He is most famous for his Open Letter from a Writer to the Military Junta, which he published the day before his murder, protesting that Argentina's last civil-military dictatorship's economic policies were having an even greater and disastrous effect on ordinary Argentines than its widespread human rights abuses. Born in Lamarque, Walsh finished his primary education in a small town in Río Negro Province, from where he moved to Buenos Aires in 1941, where he completed high school. Read more on Wikipedia

Among writers, Rodolfo Walsh ranks 4,158 out of 5,755. Before him are Janwillem van de Wetering, Mats Wahl, Bedros Tourian, Angela Sommer-Bodenburg, Michel Deguy, and I. A. L. Diamond. After him are Fedde Schurer, Pepetela, Paul Du Chaillu, Platon Oyunsky, Wen Yiduo, and Ivan Shmelyov.