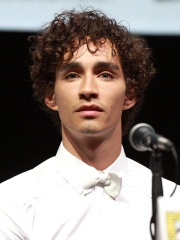 Robert Sheehan is an Irish actor. He is best known for television roles such as Nathan Young in Misfits, Darren Treacy in Love/Hate, and Klaus Hargreeves in The Umbrella Academy, as well as film roles such as Tom Natsworthy in Mortal Engines and Simon Lewis in The Mortal Instruments: City of Bones. Sheehan has received multiple Irish Film and Television Award nominations and a British Academy Television Award nomination. Read more on Wikipedia

Among actors, Robert Sheehan ranks 5,460 out of 10,030. Before him are Jim Backus, James Sikking, Will Poulter, Brad Garrett, Abigail Spencer, and Arjun Kapoor. After him are Allan Arbus, Anaid Iplicjian, Zach Roerig, Ian McNeice, Signe Hasso, and Kevin Dillon.