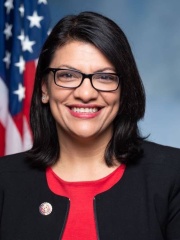 Rashida Harbi Tlaib (; born July 24, 1976) is an American politician and lawyer serving as the U.S. Representative for Michigan's 13th congressional district since 2019. The district includes the western half of Detroit, along with several of its western suburbs and much of the Downriver area. A member of the Democratic Party, Tlaib represented the 6th and 12th districts of the Michigan House of Representatives before her election to Congress.In 2018, Tlaib won the Democratic nomination for the United States House of Representatives seat from Michigan's 13th congressional district. Read more on Wikipedia

Since 2007, the English Wikipedia page of Rashida Tlaib has received more than 2,730,759 page views. Her biography is available in 24 different languages on Wikipedia making her the 14,132nd most popular politician.