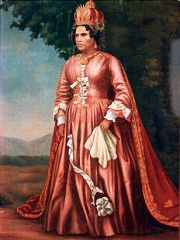 Ranavalona I (born Rabodoandrianampoinimerina (also called Ramavo); c. 1778 – August 16, 1861), also known as Ranavalo-Manjaka I, was sovereign of the Kingdom of Madagascar from 1828 to 1861. After positioning herself as queen following the death of her young husband, Radama I, Ranavalona pursued a policy of isolationism and self-sufficiency, reducing economic and political ties with European powers, repelling a French attack on the coastal town of Foulpointe, and taking vigorous measures to eradicate the small but growing Malagasy Christian movement initiated under Radama I by members of the London Missionary Society. Read more on Wikipedia

Ranavalona I was the Queen of Madagascar from 1828 to 1861. She is most famous for her policies which were designed to make the country more traditional and conservative. These policies included banning Christianity, outlawing the wearing of clothes with European styles, and forbidding the teaching of reading and writing.

Page views of Ranavalona IS by language

Among politicians, Ranavalona I ranks 2,773 out of 15,710. Before her are Maria Teresa Rafaela of Spain, Giovanna of Italy, Eric VI of Denmark, Philip II, Duke of Savoy, Ajatashatru, and Gudrun Burwitz. After her are Basarab I of Wallachia, Nabis, Eric V of Denmark, Justa Grata Honoria, Yolande of Aragon, and Psusennes I.