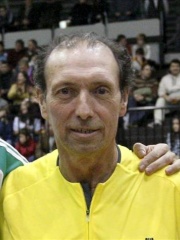 Enrique Castro González (Spanish pronunciation: [enˈrike ˈkastɾo ɣonˈθaleθ]; 23 September 1949 – 27 February 2018), known as Quini [ˈkini], was a Spanish footballer who played as a striker. In a career totally connected with Sporting de Gijón and FC Barcelona, he was widely regarded as one of the country's best strikers, having won a total of seven Pichichi Trophy awards, five of those in La Liga.A Spain international for 12 years, Quini represented the nation in two World Cups and one European Championship. Read more on Wikipedia

Since 2007, the English Wikipedia page of Quini has received more than 199,671 page views. His biography is available in 34 different languages on Wikipedia making him the 433rd most popular soccer player.

Page views of Quinis by language