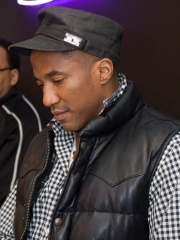 Kamaal Ibn John Fareed (born Jonathan William Davis, April 10, 1970), better known by his stage name Q-Tip, is an American rapper, record producer, singer, actor and DJ. Nicknamed The Abstract, he is noted for his innovative jazz-influenced style of hip hop production and his philosophical, esoteric and introspective lyrical themes. He embarked on his music career in the late 1980s, as an MC and main producer of the influential alternative hip hop group A Tribe Called Quest. In the mid-1990s, he co-founded the production team The Ummah, followed by the release of his gold-certified solo debut Amplified in 1999. Read more on Wikipedia

Page views of Q-Tips by language

Among singers, Q-Tip ranks 2,571 out of 3,541. Before him are Sarbel, Ana Soklič, Svala, Tooji, Ronnie Carroll, and Vânia Fernandes. After him are J. Cole, Alison Mosshart, Teo, Olga Seryabkina, Malú, and Alison Goldfrapp.