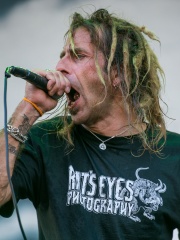 David Randall Blythe (born February 21, 1971) is an American singer and songwriter, best known as the lead vocalist and lyricist of American heavy metal band Lamb of God. He has also performed guest vocals for Cannabis Corpse, Overkill, Gojira, Eyehategod, Eluveitie, Bad Brains, Soulfly, and Clutch, and is the lead singer of side-project band Halo of Locusts. In June 2012, Blythe was arrested in the Czech Republic and was indicted on manslaughter charges related to the 2010 death of Daniel Nosek, a 19-year-old fan, after a Lamb of God concert. Read more on Wikipedia

Among singers, Randy Blythe ranks 2,099 out of 3,541. Before him are Diego Boneta, Mark E. Smith, Nâdiya, JB, Juice Wrld, and Sana. After him are Crystal Gayle, Azam Ali, Giorgia, Ida Corr, Younha, and Paolo Nutini.