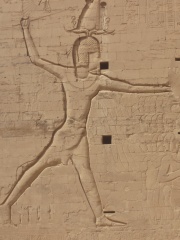 Ptolemy XII Neos Dionysus Philopator Philadelphus (Greek: Πτολεμαῖος Νέος Διόνυσος Φιλοπάτωρ Φιλάδελφος, translit. Ptolemaios Neos Dionysos Philopatōr Philadelphos; c. 117 – 51 BC) was a pharaoh of the Ptolemaic Kingdom of Egypt who ruled from 80 to 58 BC and then again from 55 BC until his death in 51 BC. He was commonly known as Auletes (Αὐλητής, "the Flautist"), referring to his love of playing the flute in Dionysian festivals. As a member of the Ptolemaic dynasty, he was a descendant of its founder, Ptolemy I. Ptolemy XII was an illegitimate son of Ptolemy IX by an uncertain mother. In 116 BC, Ptolemy IX became co-regent with his mother, Cleopatra III. However, he was forced into a civil war against his mother and his brother, Ptolemy X, leading to his exile in 107 BC. Cleopatra III sent her grandsons to Kos in 103 BC. Read more on Wikipedia

Among politicians, Ptolemy XII Auletes ranks 950 out of 15,577. Before him are Princess Ludovika of Bavaria, Halime Sultan, Lysimachus, Alfonso XII of Spain, Nikolai Bukharin, and Nadezhda Krupskaya. After him are Onan, Mausolus, Otto II, Holy Roman Emperor, Margaret of Parma, Javier Pérez de Cuéllar, and Philip III of Macedon.

Others Deceased in 51 BC