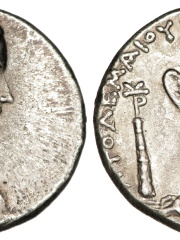 Ptolemy V Epiphanes Eucharistos (Greek: Πτολεμαῖος Ἐπιφανής Εὐχάριστος, Ptolemaĩos Epiphanḗs Eucharistos "Ptolemy the Manifest, the Beneficent"; 9 October 210–September 180 BC) was the King of Ptolemaic Egypt from July or August 204 BC until his death in 180 BC. Ptolemy V, the son of Ptolemy IV and Arsinoe III, inherited the throne at the age of five when his parents died in suspicious circumstances. The new regent, Agathocles, was widely reviled and was toppled by a revolution in 202 BC, but the series of regents who followed proved incompetent and the kingdom was paralysed. The Seleucid king Antiochus III and the Antigonid king Philip V took advantage of the kingdom's weakness to begin the Fifth Syrian War (202–196 BC), in which the Ptolemies lost all their territories in Asia Minor and the Levant, as well as most of their influence in the Aegean Sea. Read more on Wikipedia

Ptolemy V Epiphanes is most famous for being the king of Egypt in the second century BC. He was the son of Ptolemy IV and Arsinoe III.

Among politicians, Ptolemy V Epiphanes ranks 907 out of 15,577. Before him are Sergey Kirov, Michael III, Tullus Hostilius, Şah Sultan, Władysław III of Poland, and Artaxerxes II of Persia. After him are Gojong of Korea, Julius Streicher, Helmut Schmidt, Andronikos II Palaiologos, Fahd of Saudi Arabia, and Hafizullah Amin.

Others Deceased in 180 BC