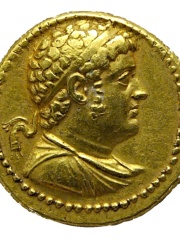 Ptolemy IV Philopator (Greek: Πτολεμαῖος Φιλοπάτωρ, romanized: Ptolemaĩos Philopátōr; "Ptolemy, lover of his Father"; May/June 244 – July/August 204 BC) was the fourth pharaoh of Ptolemaic Egypt from 221 to 204 BC. Ptolemy IV was the son of Ptolemy III and Berenice II. His succession to the throne was accompanied by a wide-ranging purge of the Ptolemaic royal family, which left control of the realm's government largely in the hands of his courtiers Sosibius and Agathocles. His reign was marked by the Fourth Syrian War (219–217 BC) with the Seleucid empire, which culminated in a decisive Ptolemaic victory at the Battle of Raphia, one of the largest battles of the whole Hellenistic Age. In the final years of his rule, control over the southern portion of the country was lost to the rebel pharaoh Hugronaphor. Read more on Wikipedia

Ptolemy IV Philopator is most famous for his role in the Battle of Raphia in 217 BC, where he was defeated by the Seleucid King Antiochus III.

Among politicians, Ptolemy IV Philopator ranks 963 out of 15,710. Before him are Gediminas, Anton Drexler, Isabel Martínez de Perón, Jeongjo of Joseon, John II of Portugal, and Maria of Austria, Holy Roman Empress. After him are George II of Greece, Critias, Wanli Emperor, Christian I of Denmark, Handan Sultan, and Peter III of Aragon.

Others Deceased in 205 BC