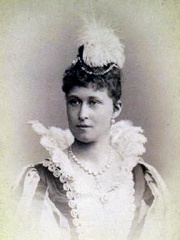 Princess Irene of Hesse and by Rhine

Among politicians, Princess Irene of Hesse and by Rhine ranks 4,867 out of 15,710. Before her are Prince Albert of Prussia, Mahmud Pasha Angelović, Mikhail Mishustin, Galswintha, Charles II, Grand Duke of Mecklenburg-Strelitz, and Janez Drnovšek. After her are Antoine Barnave, Edigu, Choe Ryong-hae, Ahmad ibn Ibrahim al-Ghazi, Princess Maria of Greece and Denmark, and Emperor Buretsu.

Among politicians born in Germany, Princess Irene of Hesse and by Rhine ranks 402. Before her are Frederick Francis I, Grand Duke of Mecklenburg-Schwerin (1756), Prince Adalbert of Prussia (1884), Isidor Straus (1845), Hans Aumeier (1906), Princess Augusta Wilhelmine of Hesse-Darmstadt (1765), and Charles II, Grand Duke of Mecklenburg-Strelitz (1741). After her are Emil Maurice (1897), Henry III, Margrave of Meissen (1218), Countess Palatine Maria Franziska of Sulzbach (1724), Charlotte Amalie of Hesse-Kassel (1650), Richard, 6th Prince of Sayn-Wittgenstein-Berleburg (1934), and Wilhelm Stuckart (1902).