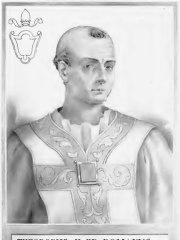 Pope Theodore II (Latin: Theodorus II; 840 – December 897) was the bishop of Rome and ruler of the Papal States for twenty days in December 897. His short reign occurred during a period of partisan strife in the Catholic Church, which was entangled with a period of violence and disorder in central Italy. His main act as pope was to annul the recent Cadaver Synod, therefore reinstating the acts and ordinations of Pope Formosus, which had themselves been annulled by Pope Stephen VI. He also had the body of Formosus recovered from the river Tiber and reburied with honour. Read more on Wikipedia

Pope Theodore II is most famous for being the pope who excommunicated the Patriarch of Constantinople.

Among people born in 840, Pope Theodore II ranks 3. Before him are Michael III and Clement of Ohrid. After him are Svatopluk I of Moravia, Wilfred the Hairy, Richardis, Notker the Stammerer, Ya'qub ibn al-Layth al-Saffar, Hucbald, Eudokia Ingerina, and Unruoch III of Friuli. Among people deceased in 897, Pope Theodore II ranks 1. After him are Pope Stephen VI, Pope Romanus, Wilfred the Hairy, Jinseong of Silla, Buhturi, and Braslav, Duke of Lower Pannonia.