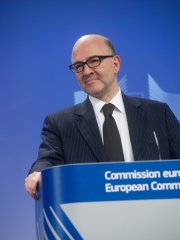 Pierre Moscovici (French pronunciation: ​[pjɛʁ mɔskɔvisi], Romanian: [moskoˈvitʃʲ]; born 16 September 1957) is a French politician who served as the European Commissioner for Economic and Financial Affairs, Taxation and Customs from 2014 to 2019. He previously served as Minister of Finance from 2012 to 2014 and as Minister for European Affairs between 1997 and 2002. Previously a member of the Trotskyist group the Revolutionary Communist League, Moscovici joined the French Socialist Party (PS) in 1984 and has since that time been a member of the Departmental Council of Doubs and of the French Parliament and the European Parliament. Read more on Wikipedia