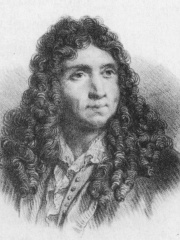 Pierre Beauchamp (also Beauchamps (30 October 1631 – February 1705) was a French choreographer, dancer and composer, and the probable inventor of Beauchamp–Feuillet notation. His grand-father was called Christophe (a musician ) and his father, a violonist of the king's chamber, was simply called Louis. Following a custom of the time, Pierre Beauchamp was named Pierre after his godfather Pierre Vacherot, tailor of the queen's pages and a relative of the Beauchamps family. See Regine Kunzle (Astier) and John Powell Powell, John S. Read more on Wikipedia

Among people born in 1631, Pierre Beauchamp ranks 6. Before him are Isaac Barrow, Mary, Princess Royal and Princess of Orange, François Vatel, John Dryden, and Abraham Brueghel. After him are Al-Rashid of Morocco, Anne Conway, and Magdalena Sibylla of Holstein-Gottorp. Among people deceased in 1705, Pierre Beauchamp ranks 10. Before him are Emeric Thököly, Sophia Charlotte of Hanover, Catherine of Braganza, Ninon de l'Enclos, Philipp Spener, and John Ray. After him are Madame d'Aulnoy, George William, Duke of Brunswick-Lüneburg, Bada Shanren, Guillaume Amontons, Johann Ernst Glück, and Princess Luise Dorothea of Prussia.

Among DANCERS In France