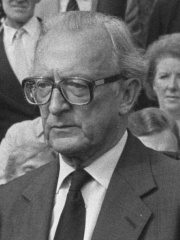 Peter Alexander Rupert Carington, 6th Baron Carrington, Baron Carington of Upton, (6 June 1919 – 9 July 2018) was a British Conservative politician and hereditary peer who served as defence secretary from 1970 to 1974, foreign secretary from 1979 to 1982, chairman of British General Electric Company from 1983 to 1984, and secretary general of NATO from 1984 to 1988. In the first government of Margaret Thatcher he played a major role in negotiating the Lancaster House Agreement that ended the racial conflict in Rhodesia and enabled the creation of Zimbabwe. Carrington had been Foreign Secretary in 1982 when Argentina invaded the Falkland Islands. Read more on Wikipedia

Since 2007, the English Wikipedia page of Peter Carington, 6th Baron Carrington has received more than 705,659 page views. His biography is available in 26 different languages on Wikipedia making him the 11,662nd most popular politician.