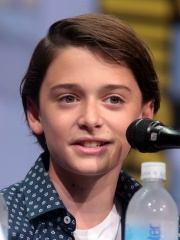 Noah Cameron Schnapp (born October 3, 2004) is an American actor. He gained recognition for playing Will Byers in the Netflix science fiction horror streaming television series Stranger Things, for which he won the Screen Actors Guild Award for Outstanding Performance by an Ensemble in a Drama Series with his fellow cast members. Read more on Wikipedia

Among actors, Noah Schnapp ranks 6,755 out of 10,030. Before him are Aïssa Maïga, Kanan Devi, Carlo Rota, Jeremy Jordan, Bonnie Somerville, and Dinah Manoff. After him are Paul Blackthorne, Kang So-ra, Elizabeth Marvel, Sophia Myles, Gary Valentine, and Princess Theodora of Greece and Denmark.