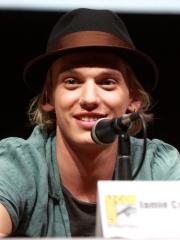 James Metcalfe Campbell Bower (born 22 November 1988) is an English actor and singer. He made his feature film debut in 2007 with a supporting role in Sweeney Todd: The Demon Barber of Fleet Street, and went on to feature in The Twilight Saga, The Mortal Instruments: City of Bones, and as the young Gellert Grindelwald in Harry Potter and the Deathly Hallows – Part 1 and Fantastic Beasts: The Crimes of Grindelwald. In the 2010s, Bower was part of the main casts of the historical series Camelot on Starz and Will on TNT. In 2022, Bower gained critical acclaim for his performance as Henry Creel in the fourth series of Stranger Things. Read more on Wikipedia