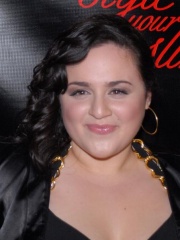 Nicole Blonsky (born November 9, 1988) is an American actress, singer, dancer, and internet personality. She is known for playing Tracy Turnblad in the film Hairspray (2007), for which she won two Critics' Choice Awards and received nominations for a Golden Globe Award and a Screen Actors Guild Award. Blonsky has starred as Willamena Rader in the ABC Family series Huge (2010), for which she received a Teen Choice Award nomination, had a recurring role as Margot on the series Smash (2013), and had roles in the films Geography Club (2013) as Therese and The Last Movie Star (2017) as Faith. Read more on Wikipedia