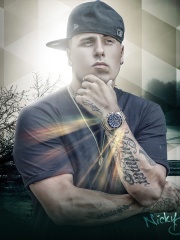 Nick Rivera Caminero (born March 17, 1981), known professionally as Nicky Jam, is an American singer and songwriter of the genres Latin trap and reggaeton. He is best known for hits such as "X", "Travesuras", "En la Cama", "Te Busco", "El Perdón", "Hasta el Amanecer", and "El Amante"; the latter three are from his 2017 album Fénix. He has frequently collaborated with other Latin artists such as Daddy Yankee, J Balvin, Ozuna, and Anuel AA. Read more on Wikipedia

Among people born in 1981, Nicky Jam ranks 131. Before him are Asuka, Georges St-Pierre, Kelly Rowland, Simon Ammann, Miyavi, and Nenê. After him are Charlotte Riley, Johan Elmander, Caro Emerald, The Rev, Belladonna, and John O'Shea.