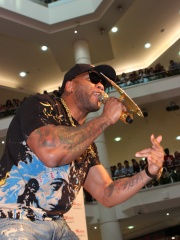 Tramar Lacel Dillard (born September 17, 1979), better known by his stage name Flo Rida (, floh RY-də), is an American rapper, singer and songwriter from Carol City, Florida. His 2007 breakout single "Low" was number one for 10 weeks in the United States and broke the record for digital download sales at the time of its release. Flo Rida's debut studio album, 2008's Mail on Sunday, reached number four in the US. The album was succeeded by R.O.O.T.S., the next year. Read more on Wikipedia

Since 2007, the English Wikipedia page of Flo Rida has received more than 2,949,263 page views. His biography is available in 46 different languages on Wikipedia making him the 1,007th most popular singer.

Among singers, Flo Rida ranks 1,011 out of 3,001. Before him are Clare Torry, Wiz Khalifa, Suraphol Sombatcharoen, Natacha Atlas, Diana Damrau, and Biff Byford. After him are Mel B, Chava Alberstein, Eva Cassidy, RedOne, Alexandra Stan, and Imogen Heap.