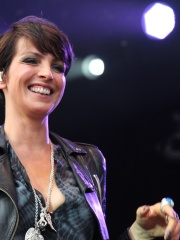 Gabriele Susanne Kerner (born 24 March 1960), better known as Nena, is a German singer-songwriter, actress, and comedian who rose to international fame in 1983 as the eponymous lead vocalist of the band Nena with the Neue Deutsche Welle song "99 Luftballons". In the same year the band re-recorded this song in English as "99 Red Balloons". Nena's re-recording of some of the band's old hit songs as a solo artist, produced by the co-composer of most of them, her former Nena band colleague and keyboard player Uwe Fahrenkrog-Petersen, rekindled her solo career in 2002. Read more on Wikipedia

Since 2007, the English Wikipedia page of Nena has received more than 1,632,285 page views. Her biography is available in 43 different languages on Wikipedia making her the 225th most popular singer.

Page views of Nenas by language

Among singers, Nena ranks 225 out of 3,001. Before her are John Denver, Ricky Martin, Nicolai Ghiaurov, Milva, Rob Halford, and Neil Diamond. After her are Desireless, Dionne Warwick, Mariska Veres, Sam Cooke, Robbie Williams, and Beyoncé.