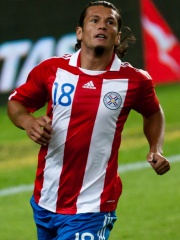 Nelson Antonio Haedo Valdez (born 28 November 1983) commonly known as Nelson Valdez or Nelson Haedo in Spanish speaking countries, is a Paraguayan former footballer who played as a striker for clubs in Paraguay, Germany, Spain, Russia, the United Arab Emirates, Greece, the United States of America and for the Paraguay national football team between 2000 and 2021.Valdez started his career with Atlético Tembetary, progressing through their youth system to the first-team squad where he made his debut at the age of 16 in Paraguayan División Intermedia in 2000. He finished his career with the club having scored 11 goals in 22 league appearances. In 2001, he was scouted to Germany's Werder Bremen II, where he scored 15 goals in 30 Regionalliga Nord appearances in his second season before joining the club's first-team. Read more on Wikipedia